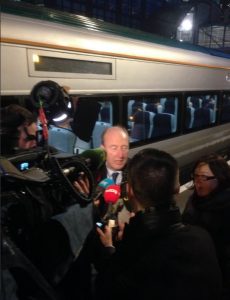 Commuters on the 06.14hrs train from Newbridge to Grand Canal Dock became the first to benefit from the new Phoenix Park Tunnel line, which began services today, Monday 21st November. The introduction of the new services follows an investment of €13.7 million in upgrading the Phoenix Park Tunnel route, funded by the Department of Transport through the National Transport Authority.

Seven new morning peak trains serving all stations from Newbridge/Hazelhatch to Grand Canal Dock (including Drumcondra, Connolly, Tara Street and Pearse), and eight new evening peak trains from Grand Canal Dock begin on Monday 21st November, with limited stop services in the opposite direction.  Full details are available at www.irishrail.ie .  They will not serve Heuston Station – customers for Heuston should use existing trains between Newbridge/Hazelhatch and Heuston Station.

Services will also ensure connections at Hazelhatch/Newbridge for customers travelling on longer distance commuter services to/from stations such as Kildare, Portlaoise and others.

The new services give a new direct public transport connection between stations in south-west Dublin and north Kildare and the central business district between Connolly and Grand Canal Dock. This is the first phase of services to operate via the tunnel.  Iarnród Éireann and the National Transport Authority plan to expand services in the future to include off-peak and weekend services.

Welcoming the new service, Minister for Transport, Tourism and Sport Shane Ross TD said “I’m delighted to announce the opening of this key piece of our public transport service. The Phoenix Part tunnel line is a vital part of our rail infrastructure and I know that it will prove to be of immense benefit to the travelling public,  as will other transport projects such as the Luas Cross City line which will open in 2017. As Minister for Transport I am very proud to be one of the first commuters to travel this line and I heartily encourage others to do so.”

Anne Graham, Chief Executive of the National Transport Authority said “the NTA is delighted that services have now commenced through the Phoenix Park Tunnel, a project that the Authority promoted and funded. Together with city centre re-signalling, the new services ensure we will exploit the full potential of existing rail infrastructure at minimal cost and will offer more rail travel options for public transport customers.”

David Franks, Iarnród Éireann Chief Executive, said “we’re delighted to welcome new and existing customers to the new services launched today via the Phoenix Park Tunnel line.  By offering direct connections from stations between Newbridge and Parkwest to the south city business district, which were not previously available by public transport, we will encourage more commuters to switch from our congested roads to a fast and efficient rail transport alternative.”

The €13.7 million investment in the tunnel route, funded by the Department of Transport through the National Transport Authority – together with recently completed resignalling works – have facilitated the new services.