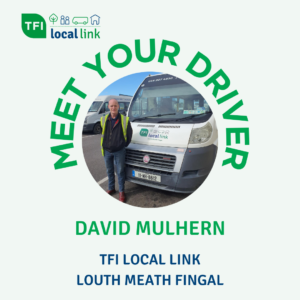 David used to be a barber for 35 years, before an increase in rates and rents made him look for a new direction in life. He heard about opportunities in TFI Local Link Louth Meath Fingal; as well as the good reputation they have for workers, and decided to switch careers.

Starting with a B licence being, and only able to drive smaller vehicles, David worked his way up to achieve a D licence–his favourite memory as a TFI Local Link bus driver. He now drives the larger bus providing mostly door-to-door services to local passengers; which he says are a lifeline for them.

As well as technical driving skills, David has picked up a wide range of skills for the role including: First Aid training, toolbox training for vehicles, and DAPA (Driver And Passenger Awareness) training. David feels that good communication skills are essential for the job and the customer service skills he picked up from his previous role has greatly helped him as a TFI Local Link bus driver.

David’s advice to anyone thinking of becoming a bus driver is: “There is always a way to start a new direction in life. Don’t let obstacles stand in your way.”

To read other profiles in the #MeetYourDriver series, click below: